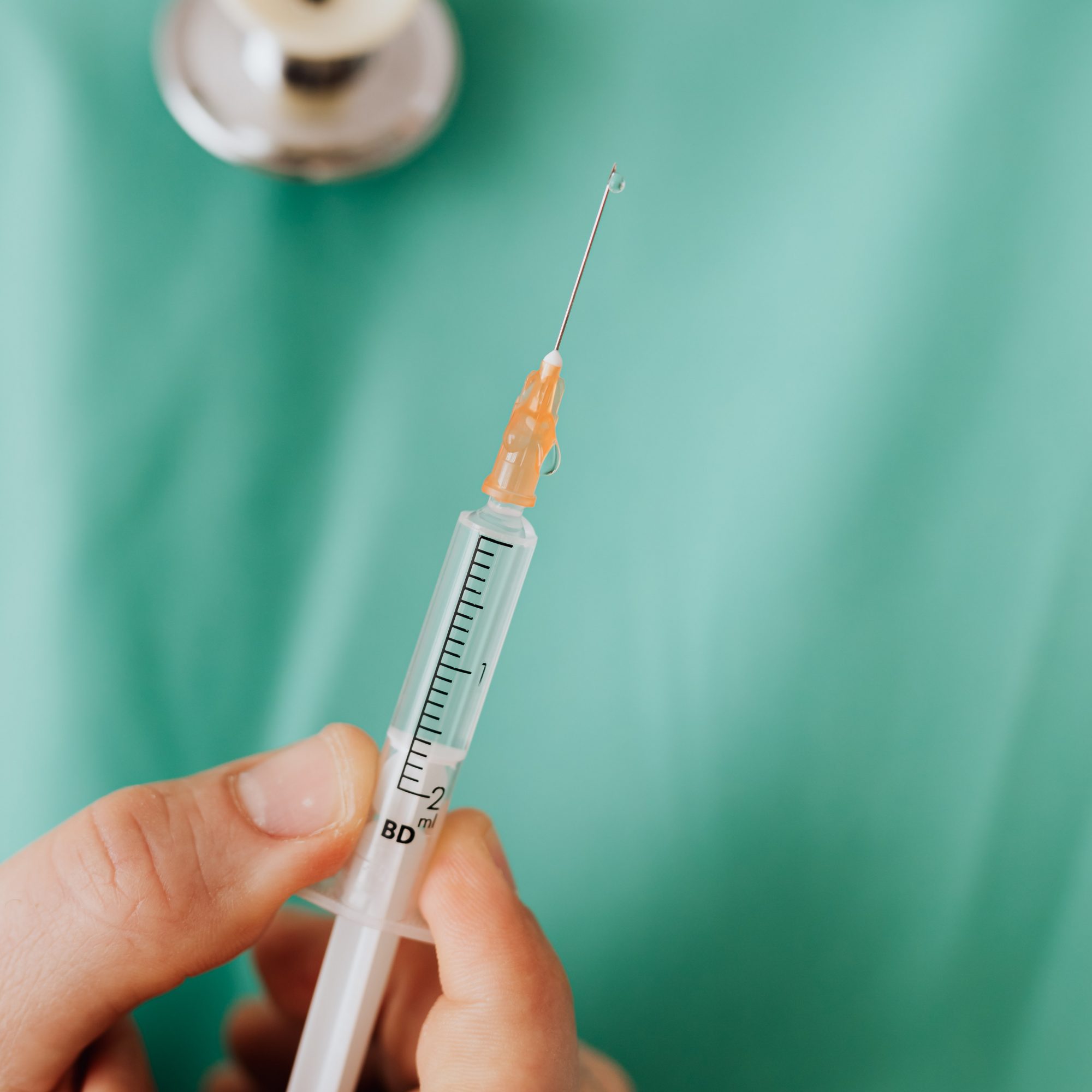 The most effective healing agents that can repair joint damages and remedy pain are already resident in our bodies. The technique of re-targeting these agents to rebuild worn or injured joints is called prolotherapy. The experts at The Guyer Institute of Molecular Medicine in Indianapolis, IN are pleased to offer this remarkable therapy, which can produce permanent relief from joint pain without surgery.

Modern surgical techniques have given the world miracles. However, for many conditions, such as joint and back pains, surgery is neither desirable or advisable. Surgery in general always carries risks. In cases where the problematic tissues or ligaments are simply worn rather than torn, surgery has only limited effectiveness.

Our bodies are already densely populated with effective healing agents. This is why a bleeding cut clots itself within moments and how a broken bone knits itself in weeks or months. When these healing agents are alerted to newly damaged tissues in the body, they rush to the scene and begin to repair them. In a matter of weeks or months, the tissues can be brought back to fresh health and viability.

This is a prolotherapy precision technique where worn or otherwise problematic tissues, particularly in the joints, back, and neck, are deliberately “disturbed’ by a clinician so that the patient’s body will begin to affect its own repair. Prolotherapy is a form of regenerative medicine. The doctor injects a harmless liquid solution, usually dextrose, a version of sugar water, to the area that’s causing the problem. The fluid then irritates the tissue where it’s been injected.

Prolo therapy Sensing the minor damage caused by the fluid’s disturbance, the body sends healing and growth nutrients to the scene and begins to build fresh new tissue. In the case of joints and other bodily regions, the new tissue can increase stability and eliminate pain without surgery. Ligaments and tendons that had been stretched, worn, or torn can be revitalized by this technique.

An Alternative to Surgery

Many pains in the body, particularly those in the back and spine, are “referred” pains. While the pain might be easily felt in a particular spot on the patient’s body, the actual source of the pain may be far from the point where the pain hurts. An easy example of this is arm pain that’s really being caused further up the body by a pinched nerve in the neck.

Even under the best of circumstances, surgery is a serious consideration. While most modern surgical techniques are well-proven, they may not always be the right first step for a particular problem. Modern imaging techniques, powerful as they are, can’t always find the exact source of joint or back pain with 100% certainty. The bodily structures that this prolotherapy treats are often hidden and difficult to image or too worn for surgical repair. By rebuilding tissue directly at these problem areas, this therapy can often repair damages that surgery can’t.

How Is Therapy Performed?

This treatment works with injections applied directly into the connective tissue ligaments of the joints. The most commonly-used solution is generally simple glucose (the sugar water). In the bigger picture, this substance is harmless to the body; there’s no fear of an adverse reaction. However, the solution is enough to irritate the injected area. The irritation stimulates the body’s natural healing mechanisms, which then initiate the process of forming new tissue in the injected area. In essence, the therapy tricks the body into making repairs in a targeted area.

The therapy is typically employed on large, complex joints, such as the knee and shoulder. These areas usually require a series of five to eight injections, spaced out over time, to deliver the full healing effect. Smaller joints, such as elbows or ankles, may need only one or two injections.

How Successful Is It?

This therapeutic technique has been practiced in various forms for more than 80 years. With the advent of new technology-driven surgical procedures over the past several decades, such as laparoscopy and robotic assistance, many doctors have focused their training on these new techniques rather than long-established (and less costly) therapies.

This is a bit of a shame because the therapy has been proven to be effective in general, and for many patients, it represents the best option for joint pain and instability. This treatment can improve torn ankle, knee, and other ligaments without invasive surgery and its associated costs and recovery.

What Does the Data Show?

The National Center for Biotechnology Information (NCBI) has published a systematic review of the effectiveness of prolotherapy in clinical trials. A variety of patient conditions were examined ranging from degenerative diseases like osteoarthritis to injuries like torn rotator cuffs in the shoulder.

A total of 33 studies were examined, including random-controlled testing and case series testing. The patients’ pain conditions were divided as follows:

Usage for chronic, painful tendon conditions that result from age or overuse of one or more joints showed the most consistently positive clinical data. Rescue squads from the body’s immune system released healing growth nutrients almost immediately after treatment. Improvements of 30-40% in tendon strength have been documented.

Clinical data conclusively showed that the therapy is an extremely viable treatment for tendon and ligament problems in patients whose conditions are not improved by conventional therapies, such as physical therapy or cortisone injections.

OA is a condition marked by the breakdown of cartilage and the disruption of the natural collagen in the joints. In a randomized, controlled, double-blinded study, the therapy was found to yield significantly greater improvement in pain reduction, swelling, buckling episodes, and flexion range compared to pain-reducing injections or exercise.

Patients who had received the glucose injections showed significantly greater improvement one year after treatment than control patients who didn’t. More impressively, a followup analysis reported that most participants in the studies continued to experience improvement of knee pain, function, and stiffness scores even more than two years after the start of the study.

Clinical data shows that in approximately 90% of patients, low back pain typically originates from overuse, straining, lifting, or bending. The resulting damages include ligament sprains, muscle pulls, and herniated disks. Everyone knows a slipped disk is painful, but it is useful to remember that it’s the ligaments that hold spinal disks in place. When ligaments are weak, the disk is more likely to herniate, or “slip.”

Muscle pain is usually due to a state of insufficient energy metabolism in the muscle. Therapeutic injections into myofascial (muscle) trigger points are designed to stimulate energy production at the cellular level. The increased activity results in increased metabolism at the trouble spot and a potential end to the pain.

In a randomized, controlled test, one group of patients were treated with prolotherapy, while another was treated for the same complaints with lidocaine (a pain reliever). A week after the injections, virtually all the prolotherapy patients reported improvements in pain and perceived pressure, while the lidocaine patients did not show improvement from either measure. Pain killers only cover up a problem: they don’t solve it.

The test results of these studies, which were gathered by the journal Clinical Medical Insights, showed consistently positive results in all clinical trial settings. Since pain is a subjective experience (though usually from a real, objective source), both measured and reported pain was recorded in the studies.

The random controlled testing (RCT) tests were high-quality Level 1 evidence of success for patients suffering from osteoarthritis (OA) of the knees and fingers, epicondylitis (golfer’s elbow), rotator cuff injury, and muscle pain. The results also showed objective improvement in the temporal mandibular joint (TMJ). This complex joint, where the jaw and skull meet, is responsible for many cases of tinnitus (ringing in the ear) and painful, clicking jaw.

Assessing What We Know

Based on the clinical evidence, this therapy is an excellent option in the treatment of muscle pains in patients for whom conventional, conservative therapies haven’t worked. It has proven to be effective in the treatment of osteoarthritis of the knee and finger joints. In many cases, improvements here can be life-altering.

For patients who haven’t responded to conservative methods such as physical therapy, this therapy has been shown to be effective in the treatment of spinal and pelvic pain. An end to back pain can also be life-altering for many people.

There are no significant side effects to the treatment. Again, this is a time-tested medical technique whose actual roots go back nearly a century.

How Long Before I Feel Results?

Some patients experience relief from pain soon after the first injection. Most patients will feel real improvement after 3-4 injections. The number of treatments and duration between them is determined by the rate of progress that the patient is making with their pain and recovery. Studies suggest a success rate (“greater than 50% improvement in pain level”) of 80-90% for all patients.

Living with pain is a lot to ask of anyone. Pain not only affects our physical abilities, like the ability to work, walk, and socialize, but also associated physical abilities. When you’re in pain you don’t sleep well, you lose your appetite, and you become more sedentary. None of these are healthy. Pain has a negative psychological component. This can spiral into depression and abuse of pain medicines and have tragic effects on families and relationships.

There’s no reason to live with this kind of pain when a time-tested, accessible and non-surgical option is available. People have very good reasons for wanting to avoid surgery on the back, neck, or another complex area of the body. Not every operation goes well, and even the ones that do generally require serious recovery time.

Prolotherapy can be the answer, and not only for those who prefer not to have surgery. In many cases, is the superior alternative to surgery. Surgery can only provide a patch or a workaround to a physiological problem. This therapy fixes the problem by letting your body fix the problem with fresh, healthy new tissue. Our doctors can advise you on how this treatment can change your life by making it pain-free. Arrange a consultation with the experts at The Guyer Institute of Molecular Medicine in Indianapolis, IN and start your journey to living pain-free again.